Clubb Properties and Hartland Clubb have purchased the Montrose FFA project at the Montrose  County 2016 Fair.  This little Allis Chalmers ‘B’ began service in 1948 (by the serial number)and was found itself at a farm on High Mesa, Olathe.  Jerry Hubbard procured it with another tractor purchase and donated it to the FFA for their project.  Carter Smith, Nathan Cochran, and Kooper Davis took on the project and are now entered in a national competition.  The money from the winning bid, $5800, will be used by the Montrose Future Farmers of America to start another project.  Congratulations to the boys and best wishes for your next competition.

Hartland’s father, Gus Clubb, operated a Chevrolet dealership, Allis Chalmers equipment dealership, garage, and Shamrock gas distribution business between 1933 and 1943 in Olathe.  Allis Chalmers offered the ‘B’, ‘C’, and ‘WC’ models for the modern farmer.  A ‘B’ could have purchased with 3 basic implements for less than $800.  Twelve tractors could be shipped on one flat bed car pulled by Rio Grande to the Olathe rail depot and subsequently delivered to eager farmers in the area.  If the rail company could not deliver to Olathe, the rail car would be sided in Grand Junction.  Hartland and eleven buddies would be driven by car to the GJ depot.  Starting early in the morning, they would drive the tractors back on the highway to Olathe at 8 mph.  Typically after the purchase, Hartland would trailer a new tractor to the purchaser’s farm along with the necessary implements.  After staying to give a demonstration and make sure everything was satisfactory, Hartland was treated to a tasty lunch.

The ‘B’ was made by the Allis Chalmers company and sold between 1938 and 1957.  Henry Merritt, general manager for the company, created the B to sell to the farmer with small acreages that had not previously mechanized.  Since the farms in the area were so productive,  100 acres could be very profitable and therefore fit the market of a smaller tractor.  The ‘B’ was offered as an inexpensive, durable, and versatile solution that was easier to maintain than horses.

A rustic star frame surrounds Old Glory. It is a wonderful throw for any home. Finished size is 69x55".  Kit price is $95 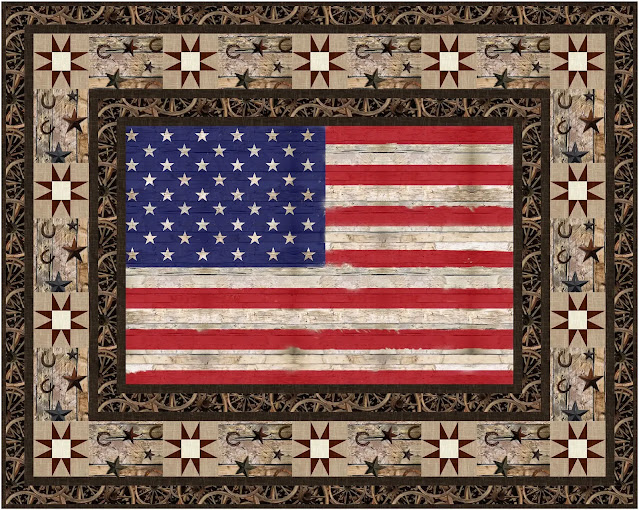